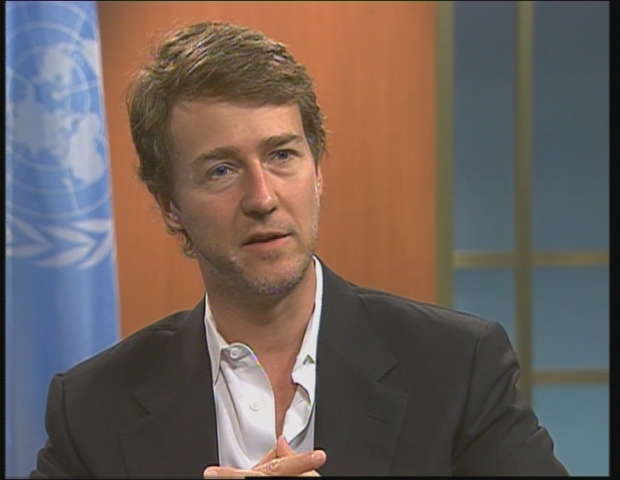 08-Jul-2010 00:02:52
Actor, director and newly appointed UN Goodwill Ambassador for Biodiversity Edward Norton says that “in light of catastrophic experiences like the Gulf oil spill,” it has become clear that “human well-being is intertwined fundamentally with biodiversity.” UNTV

At the designation ceremony Ban said that it was “a great honour and pleasure” to enlist Norton to help raise awareness about this issue.


In his new role, Norton said he will work with the UN Convention on Biological Diversity (CBD) to spotlight the crisis of biodiversity and ensure world leaders take appropriate measures to protect the environment.

The Goodwill Ambassador noted that “in light of catastrophic experiences like the gulf oil spill” it was important to focus on “the fact that human well-being is intertwined fundamentally with biodiversity” and that humanity’s “ability to thrive as a species and as a civilization totally depends on that web of life.”

The actor, twice nominated for an Academy Award, said that beyond public awareness, “the priority has got to be at the level of global leadership and policy” as issues relevant to biodiversity such as such as climate change, deforestation and fisheries policies “are taking place at the international agreement level.”

At a later press conference Norton commented that for people of his generation, the issue of environmental sustainability and “the way that human well-being is connected to the web of biodiversity” is emerging as the “defining challenge of this era.”

Today’s appointment comes as the UN marks 2010 as the International Year of Biodiversity, with heads of State set to discuss the issue at a high-level meeting at UN Headquarters in New York at the start of the General Assembly’s 65th annual General Debate in September.

Norton’s family has long been involved in sustainable development issues, with his father being a conservation advocate and his maternal grandparents having founded an organization to help provide affordable housing in the United States.

For his part, the new Goodwill Ambassador is very active in garnering support for conservation efforts, serving as a board member of the Maasai Wilderness Conservation Trust and taking part in launching an innovative social networking platform called Crowdrise to boost participation in charitable work.