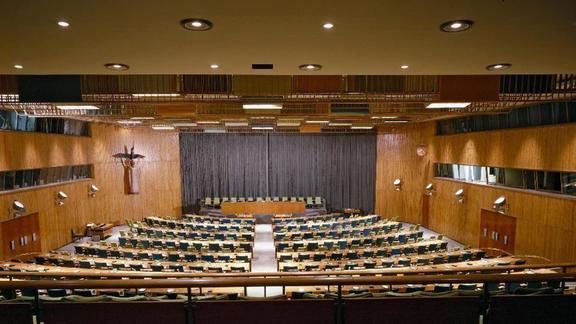 It also adopted resolutions related to the membership of both the Peacebuilding Commission and an advisory group on the situation in Haiti, as well as turning to the issues of crime prevention and criminal justice, among other matters.

The Council first took action on the draft decision “Procedure for taking decisions of the sessional bodies and the subsidiary organs of the Economic and Social Council during the coronavirus disease (COVID-19) pandemic at the 2022 session of the Council” (document E/2022/L.3), which the Chair said contained no programme budget implications. The Chair noted that the intention of the draft was not to discourage subsidiary bodies from meeting in person, but rather to provide a decision-making modality for those subsidiary bodies for which it is not practicable to meet in person, in particular those composed of experts based in capitals. It adopted the decision without a vote.

It then considered a draft oral decision to adjust the dates of the fifty-third session of the Statistical Commission and the 2022 sessions of the Committee on Non-Governmental Organizations, respectively. The draft had no programme budget implications and was approved without a vote.

The Council next considered the election of a member of the Organizational Committee of the Peacebuilding Commission in accordance with General Assembly resolution 60/180 and Economic and Social Council resolution 2015/1. The Chair noted that there is one vacancy on the Organizational Committee for a member of the Council to complete the unexpired portion of the term of Norway, beginning on the date of election and expiring on 31 December 2022. She further noted that the Chair of the Western European and other States for the month of February 2022 that the group had endorsed the candidature of Portugal. The Council then elected Portugal by acclamation to the Organizational Committee of the Peacebuilding Commission.

The Council then considered the draft decision “Appointment of an additional member of the Ad Hoc Advisory Group on Haiti” (document E/2022/L.2), which contained no programme budget implications. It was adopted without a vote.

Speaking after the vote, the representative of Canada said that as Chair of the Advisory Group, he was pleased to add Saint Vincent and the Grenadines to the Ad Hoc Advisory Group on Haiti.

The representative of the United States, speaking after adoption, said his delegation joined consensus on revisions, but urged the Inland Transport Committee to ensure ECE does not support one set of regional recommendations and agreements over other relevant ones, specifically taking steps to avoid simply promoting European practices worldwide. He cited the example of a global approach found in the World Forum for the Harmonization of Vehicle Regulations’ Working Party on Automated/Autonomous Vehicles, which created a new leadership configuration, ensuring delegates from Europe, Asia and North America equally share responsibility, with documents prepared in a neutral manner. “A truly global forum must look beyond one region for creative ideas,” he said, advancing technologies and innovation regardless of geography.

The Council next considered the decision “Venue, dates and provisional agenda of the twenty-fourth session of the Committee of Experts on International Cooperation in Tax Matters” (document E/2022/45), adopting it without a vote.

Finally, the Council adopted decision II, “Report of the Commission on Narcotic Drugs on its reconvened sixty-fourth session”, recommended by the Commission on Narcotic Drugs for action by the Council in chapter 1 of the report on its reconvened sixty-fourth session (document E/2021/28/Add.1), taking note of that report.