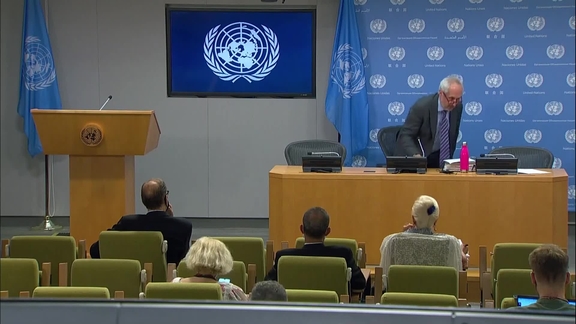 Helen La Lime, who also heads the UN Integrated Office in Haiti (BINUH) said the prime minister, who now leads the government in line with the country’s constitution in the event of a sitting president’s death, was committed “to dialogue, and to continuing with a process to hold elections according to the electoral calendar that was released just last week.”

She said that would mean a first round of elections on 26 September, with a second round, set for November.

Speaking via video link to reporters in New York, Ms. La Lime said that “all efforts must be made” to bring those responsible for the assassination of the president to justice, and that a national investigation led by Haitian police, was now underway, following a number of arrests.

“It is too early for me to comment on exactly what went on and the circumstances surrounding this abhorrent act of violence…We will continue to wait for further developments, and to assist as we can.”

She said the Government was “very serious” about ensuring that the perpetrators are caught and said BINUH would provide any help at its disposal to aid the investigation.

The Special Representative told reporters that the Security Council had discussed behind closed doors, a request from Haiti to provide “security assistance” with the on-going investigation, amidst the deepening political crisis, and acknowledged that there were tensions which needed to be resolved.

Ms. La Lime said that “there certainly are tensions, there are certainly people on all sides of this issue having different interpretations of Article 149 (of the Constitution); that’s why it’s important that dialogue happen, and that the Haitian authorities and Haitian stakeholders, have a dialogue so that a way forward can be charted, one that gives the people of Haiti the opportunity to decide who their next government (is).”

She said the UN in Haiti was working “very hard and very closely” with all Haitian stakeholders at this time, and was encouraging “all national stakeholders to remain united. Our message is that stakeholders need to set aside their differences, and to chart a common way forward, and overcome this difficult moment, in a peaceful manner.”

Asked if the UN should now consider restoring some kind of peacekeeping operation in the light of the current situation, Ms. La Lime said that the government needed to specify what kind of security assistance it is asking for. “In the meantime, we need to continue to use the technical assistance we have on the ground, maybe render it more dynamic, so that we can call on additional support. But the key is in the next two weeks”, she added.

“We’ve got to really be working in the most effective way to ensure that this investigation moves forward…and that’s exactly what we intend to do.”